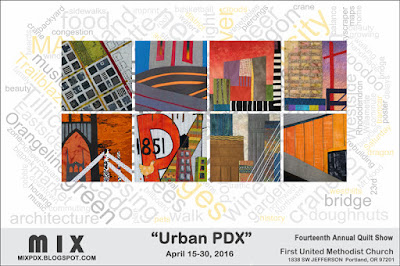 For this year’s project, we brought our focus in from the rural aspect of the Allison Inn in Newberg to the teeming center of Portland.  Our city has had a new explosion of growth as the Recession of 2008 recedes, but with our Urban Boundary constraints and a drive for density to support mass transit, Portland finds itself facing the same dichotomy of old vs. new that is bedeviling so many cities.  Our group decided to speak to this struggle between the old and new in the current evolution of Portland.  Some illustrated a single aspect of our city’s growth and personality.  Others dialed out for a broader focus, showing some old buildings with some new, or the best-loved highlights of this wonderful city. There are head-on views, a bird’s eye view and some angled views, with all pieces measuring 30” x 40”.

We experimented with the use of a unifying factor this year by saying that each piece had to contain some use of the yellow that is found on the ubiquitous #2 pencil.  Who knew there are so many yellows on #2 pencils?  When did that become de-standardized?  It was an exciting discovery and people solved this in different ways, in greater and lesser amounts.

We each also made a small piece, 8” x 20”.  Initially, these were supposed to be distortions of an aspect of our large piece, a “stretched out” segment, but this idea grew into several different things and it is entertaining to see how each artist decided to miniaturize.


Above all, the show is an expression of great affection for the place we all call Home, and it felt as though we had barely scratched the surface!

Posted by Hilde Morin at 1:17 PM No comments:

MIX is a Portland, Oregon based group dedicated to the creation of fiber art. We have a show of completely new work each April in Portland, as well as gallery exhibits that draw from this show and include other new pieces. Members also exhibit independently in various venues.
Thanks for visiting!